Three years ago I had a vision for what Interfaith Week might be. It was a grand vision. And because my background is in marketing, media and events, that vision included lots of complicated moving parts. It included big corporate sponsors like Best Buy and ValPak and Dex Imaging and Bloomin’ Brands — local companies that could get behind the cause of tolerance and peace and pluralism. Community-based companies that could afford to cut checks so that we might get the message out to as many people as possible using billboards, print, radio, and TV.

The vision included bringing famed keynote speakers to town like Karen Armstrong, Krista Tippett, Richard Rohr, Eboo Patel and the Dalai Lama. I imagined that we would screen documentary films and enjoy music and dance performances from well-known artists and musicians. My vision was that we would put on a show — because that’s what I knew and that’s what I’m good at.

What actually happened is that we opened up the programming to the community itself. And I never could have predicted the outcome. Proposals began to come in from faith communities willing to collaborate with one another to create something really special and unprecedented — not from the top down, but from the ground up.

What Interfaith Week has actually become is greater than I could ever have hoped.

This year, our opening ceremony was hosted by St. Mary our Lady of Grace Catholic Church and featured calls to prayer from Jewish, Buddhist and Muslim communities from all around the bay. Hearing Imam Azhar Subedar singing the Arabic call of the Muezzin in that sanctuary was simply sublime. And hearing Frank Tedesco talk about the lack of theology in Buddhist traditions in the hallowed halls of Catholicism was unforgettable.

This year, over shared meals all across this area and over the past seven days I have seen faith leaders and communities come together to plant the seeds of relationship, and enter into dialogue, in order to find solutions together. These solutions look like cooperative service projects and community cleanups, increased collaboration with city government, inter-congregational visits and sister community programs, increased religious literacy among neighborhoods, more support and programming for our youth and our children, and a concerted effort to focus on nonviolent language and demonstration.

What I have seen this year is not merely a show put on for the public. What I have seen, and continue to see every year, is the actual work of interfaith dialogue and bridge-building being done in our city. This year’s event saw an increase in geographical participation as well, taking us across the bridge to Tampa and north to Clearwater. This means not that there’s more work to do, but that there are more people willing to do it.

If the purpose of this week is to get together in a safe collaborative and educational place in order to talk about our faith and beliefs, then here’s what I believe — I believe that as the future of Interfaith Week and the work you all are doing unfolds, so unfolds the future of religion itself. END_OF_DOCUMENT_TOKEN_TO_BE_REPLACED 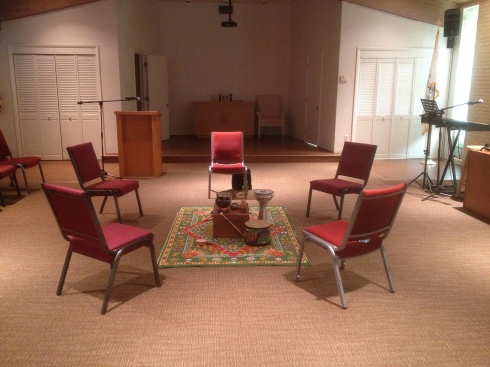 For two years, the small but growing Integral Church community has met outdoors, in the beautiful and spacious parks of St. Petersburg, FL and for two years, the weather on the third Sunday of the month has been gorgeous. We have had the honor and pleasure of gathering to discuss religion, philosophy, science and spirituality accompanied by music and meditation. We have deeply listened to one another and formed lasting and meaningful relationships.

Starting in February, we are starting up a new monthly service. On the first Thursday of the month, beginning February 5, we will be meeting in the chapel at Trinity Multicultural Center from 6:30-8 p.m. This indoor service will differ from the Third Sunday services (currently held at Crisp Park) in that there will be chairs, a roof and four walls. For now, the order of service will remain the same at both services but the guests (speaker, musician, meditation) will change at each, so we encourage you to attend both if possible. First Thursdays will allow for our community to include those who just can’t be present on a Sunday morning, and we know there are more than a few of you!

I also want to extend my deepest gratitude to all those who have made the time to gather with us (however briefly) this year and have shared in this experience. I realize that in a circle there is no “back pew” allowing someone to discreetly hang behind and observe while other people read things aloud and participate in group activities. To those of you who continue to show up, there are no words to convey my appreciation. As our services continue to evolve, I rely on you for input on what is working and what is not.

We look forward to meeting you, learning from you and experiencing Spirit-in-Action together.

Does Our Name for “God” Really Matter?

Being a religious studies major in college, I studied Buddhism, Taoism, paganism, and all sorts of other ‘isms’ that helped me to fully let go of the idea that “God” is some transcendent, dualistic-thinking, bearded dude up in the sky judging everybody.

I used to get into debates with Christians over terms and definitions and I moved away from using the term “God” for a long time in order to refer to the source of all that is.

I believe ‘it’ is within us and around us. We are part of it and it is us. ‘It’ is everything and we can influence how it shapes our lives through the power of our thoughts and feelings in regard to it.

That said, I recently reconnected with two traditionally Christian friends whose belief in that higher power — that source energy — is so unfailingly strong and beautiful that I was reminded again that our concepts of it are really no different, despite the fact that we describe it using different terminology.

They too see that my faith in energy and the magic of the universe is really the same as their faith in “giving it over to God.” They pray. I meditate. They go to church. I go to the ocean. It’s the same however and wherever we find it and whatever we choose to call it. Coming to that realization has allowed us to have some of the most incredible, heart-warming conversations and moments I’ve ever shared with anyone.

I say all this to justify my newfound use of the term “God.”

END_OF_DOCUMENT_TOKEN_TO_BE_REPLACED

The Real Problem With Religion

We’re stalled on the interstate without a map. And the map has yet to be drawn.

We’re told that each institutionalized religion is the only path to salvation, righteousness, prosperity, truth, wisdom, peace, etc. ad nauseum.

But when we start to personally unfold into new stages of growth (within and without), when we start to become a more mature version of ourselves, we sometimes find that our religion doesn’t provide a mature form of spirituality. It’s like having an appliance crap out on you the day after your 5-year warranty expires.

ERROR: We apologize, we are no longer offering support (technical, emotional, or spiritual) for versions 5.X (and above) of the “Your Self” hardware. If you’d like to be notified when this support becomes available, join the club.

Religion itself suffers from a form of philosophical retardation, permanently stunted at a level of adolescence, unable to position itself in relationship to others – unable to take second- and third-person perspectives.

According to Bishop John Shelby Spong, “the church doesn’t like for people to grow up, because you can’t control grown-ups.”

Here’s what Integral theorist, Ken Wilber has to say on the subject:

Everybody is born at square one. There will always be people at [all stages of consciousness] and that is fine. An enlightened society would always make room for that by recognizing that stages in development are also stations in life. And somebody can stop at any of those stations (of Spirit’s own unfolding) and they deserve honor and respect at whatever station they are at.

But the earlier stations — archaic to magic to mythic — involve stages that, nonetheless, are ones that humanity’s leading edge passed through in its infancy, childhood, and adolescence. But because religion alone is the repository of the myths created during those times, religion alone is the institution in today’s world that gives legitimacy to those earlier stages and stations for men and women. And religion alone owns that 70% of the world’s population at those stages.

If “religion” continues to be defined as the tactile and social side of spirituality — rooted in dogma, doctrine and myth — and as long as those myths continue to be told (and interpreted) from magic and pre-rational levels of development, there will be no forms of religion at the higher stages (rational, collaborative or pluralistic).

All interfaith dialogue will hit a dead end, religious fundamentalism will remain the status quo, holy wars will continue to be waged, and we will continue to seek (to sometimes extreme ends) that which we already are and have always been.

UPDATE: Some of the Abrahamic traditions (Christianity, Judaism and Islam) do have maps of the higher stages provided by Christian Mysticism, Kabbalah and Sufism, respectively. But, they are for the most part denied or attacked by the institutional and patriarchal forms of these religions.

It’s time to change this system from within. And here’s what you can do about it: