A History of Integral Spirituality

“Thinking … is no more and no less an organ of perception than the eye or ear. Just as the eye perceives colours and the ear sounds, so thinking perceives ideas.” – Rudolf Steiner (Goethian Science, 1883)

1883 – German philosopher and critic, Friedrich Nietzsche (1844-1900), begins proposing, in Also sprach Zarathustra, that a new post-metaphysical, pro-body spirituality for the whole planet must be produced by people who have traversed nihilism, romanticism and relativism and discovered the valuing-principle common to all perspectives.

1906 – Rudolf Steiner (1861-1925), an Austrian philosopher and architect influenced by Goethe, Theosophy and Esoteric Cosmology, comments on the “integral evolution of man” during a lecture in Paris.

“The grandeur of Darwinian thought is not disputed, but it does not explain the integral evolution of man… So it is with all purely physical explanations, which do not recognise the spiritual essence of man’s being.”

1912 – Russian philosopher and journalist P.D. Ouspensky (1878-1947) publishes Tertium Organum. This book proposes to initiate a spiritual revival of humanity through the uniting of all disciplines and perspectives using a “higher logic” of both/and. 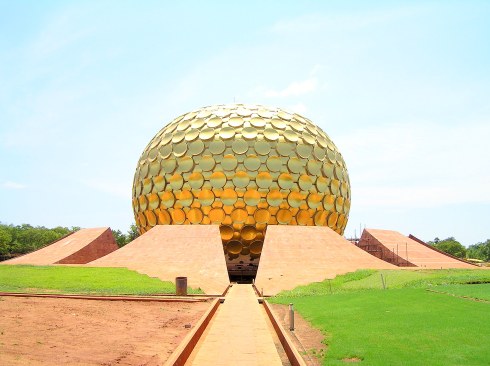 Matrimandir (Shrine to the Mother) at Auroville, India

1914 – Sri Aurobindo (1872-1950) publishes Synthesis of Yoga and The Integral Yoga, in which he intended to harmonize the paths of karma, jnana, and bhakti yoga as described in the Bhagavad Gita. It can also be considered a synthesis between Vedanta and Tantra, and even between Eastern and Western approaches to spirituality. Aurobindo also proposed a concentric hierarchy consisting of the physical, vital, mental and supramental bodies.

1914 – In Russia, Harvard sociologist Pitirim Sorokin (1889-1968) began referring to the emergence of a future, spiritually-based integral society and began using phrases like “integral philosophy” and “integralist.”

1915 – Following his break with Sigmund Freud (1856-1939) over spirituality and the collective unconscious, Swiss psychiatrist and psychotherapist Carl Jung (1875-1961) begins to record his experiments with trans-rational mysticism in his famous Red Book.

1922 – French philosopher and Jesuit priest, Pierre Teilhard de Chardin (1881-1955) introduces the concept of the “noosphere” (an emerging layer of consciousness that envelops the Earth) in his Cosmogenesis. According to Vladimir Vernadsky (1863-1945), the noosphere is the third stage in the earth’s development, after the geosphere (inanimate matter) and the biosphere (biological life). Just as the emergence of life fundamentally transformed the geosphere, the emergence of human cognition will fundamentally transform the biosphere.

1922 – G.I. Gurdjieff (1866-1949) sets up his Institute for the Harmonious Development of Man outside Paris. It is an internationally renown spiritual training facility which deals with multiple lines of development and perspectival multiplicity of the human psyche. It employs a special language organized by “evolution” and “relativity.”

1945 – British writer Aldous Huxley (1894-1963) releases The Perennial Philosophy, an attempt to present the “highest common factor” of all theologies by assembling passages from the writings of saints and prophets who approached a direct spiritual knowledge of the Divine.

1949 – The Ever-Present Origin is published by Swiss linguist and philosopher, Jean Gebser (1905-1973), describing human history as a series of mutations in consciousness. The book introduces the idea of “structures of consciousness” – archaic, magical, mythical, mental and integral/aperspectival.

1951 – Theologian and Stanford University Professor Frederick Spiegelberg (1897-1994) along with British-born poet philosopher Alan Watts (1915-1973) reach out to Sri Aurobindo in India to recommend someone “well versed in Eastern and Western philosophies with a deep knowledge of integral yoga” to help them found the American Academy of Asian Studies in San Francisco. Aurobindo appoints Dr. Haridas Chaudhuri (1913-1975) to travel to San Francisco. Integral Spirituality is officially planted in the United States.

“Spiegelberg’s phrase “the religion of no religion” had deep existential roots. It was based on a mystical encounter with the natural world he experienced as a young theology student. He was walking in a wheat field on a bright day when, quite suddenly, his ego vanished and what he calls the Self appeared. Through this altered perspective, he began to see that God was shining through everything in the world, that everything was divine, that there was nothing but holiness. As he reveled in this revelation, he came around a corner and found himself confronting a gray church. He was horrified. How, he asked himself, could such a building claim to hold something more sacred, more divine, than what he had just experienced in the poppies, birds, and sky of the now divinized cosmos? It all seemed preposterous, utterly preposterous, to him. From the theological scandal of this initial altered state, Spiegelberg developed and theorized what was essentially (or non-essentially) an apophatic mystical theology that approaches religious language, symbol, and myth as non-literal projective expressions of some deeper metaphysical truth that, paradoxically, is simultaneously immanent and transcendent—a kind of dialectical or mystical humanism, if you will. It was just such a comparative mystical theology grounded in the natural world, and just such a critical but deep engagement with the religious traditions of the world, that inspired Murphy and his colleagues in their new venture.” – Jeffrey Kripal, Esalen: America and the Religion of No Religion

1955 – Teilhard de Chardin posthumously publishes the controversial The Phenomenon of Man. Borrowing from Huxley, Teilhard describes humankind as “evolution becoming conscious of itself.” The book also introduces the concept of the Omega Point – a culmination of Supreme Consciousness.

1957 – Alan Watts publishes The Way of Zen, a synthesis of Eastern and Western spiritualites as well as General Semantics and Cybernetics.

1960 – Teilhard de Chardin releases The Divine Milieu to synthesize theology and science and demonstrate that “secular (scientific) work was an integral element of creation.”

1962 – Influenced by Huxley’s studies of “human potentiality,” Michael Murphy (1930-), Dick Price (1930-1985) and Spiegelberg establish the Esalen Institute (a retreat center and intentional community) on 120 acres of the Big Sur coast in California.

1967 – Hungarian-born author and journalist Arthur Koestler (1905-1983) introduces the concept of holons (something that is simultaneously a whole and a part) in The Ghost in the Machine. Holons exist as self-contained wholes in relation to their sub-ordinate parts, and dependent parts when considered from the inverse direction.

1973 – Dr. Timothy Leary (1920-1996) writes Neurologic to explain his model of an evolutionarily unfolding spectrum of consciousness anchored to chemical brain circuitry and DNA. These nested circuits can be self-activated by pioneers and mutants and result in cosmic and spiritual forms of psychology which operate beyond the reprogrammable multiplicity of the ordinary personality. 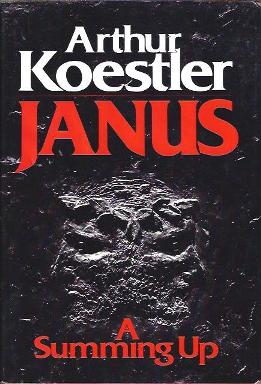 Arthur Koestler’s “Janus: A Summing Up”

1992 – Michael Murphy and George Leonard (1923-2010) develop what is to become Integral Transformative Practice, commencing their study and assembling the first ITP group, which met every Saturday for two years.

1995 – Murphy and Leonard publish The Life We Are Given: A Long-Term Program for Realizing the Potential of Body, Mind, Heart and Soul.

1995 – American psychologist and philosopher Ken Wilber (1948-) publishes the 850-page Sex, Ecology, Spirituality, a dense and controversial work that attempts at “orienting generalizations” for all of the world’s wisdom and faith traditions, a continued and holistic synthesis of science and spirituality. The book re-introduces the concepts of holons, the noosphere, as well as the Pythagorean term, “Kosmos,” which is to mean not merely physical existence but the sum of all manifest existence. The primary contribution of SES is the AQAL (all quadrants, all levels) model, which posits that all holons consist of four irreducible dimensions when placed on the axes of interior/exterior and individual/collective.

1996 – ECLET becomes Spiral Dynamics when Don Beck (1937-) and Chris Cowan publish their work, introducing the concept of vMemes (value systems that include self-propagating ideas, habits or cultural practices). Beck and Cowan use the word “integral” for the developmental stage that follows the “pluralistic” stage in their model. The essential characteristic of this stage is that it continues the inclusive nature of pluralism, yet extends this inclusiveness to those outside of the pluralistic mentality. Beck and Cowan also introduce the ideas of “first tier” and “second tier,” which refer to major periods of human development.

1996 – Wilber publishes A Brief History of Everything, a re-working of Sex, Ecology, Spirituality into a shorter, Q&A format, aimed at the mainstream. “Integral Theory” becomes more popular in America, eventually being cited by politicians such as Hillary Clinton and Al Gore. 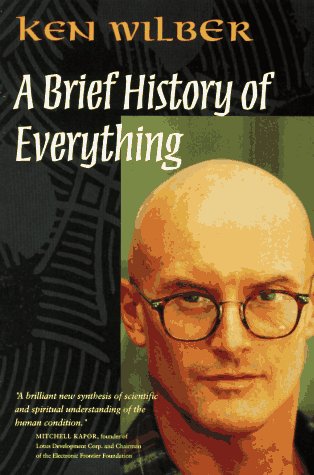 The book that popularized “Integral Theory.”

1998 – Integral Institute, a “think-and-practice tank” based in Boulder, CO, is formed by Wilber, Steve McIntosh, Nicole Trudell Churchill, Stuart Davis, Saniel and Linda Groves-Bonder and others.

2006 – Wilber publishes Integral Spirituality and introduces Integral Methodological Pluralism (IMP) by adding a dimension of methodology (or quadrivia) to the existing interiority of the quadrants.

2012 – The Integral Church in St. Petersburg, FL – a radically-inclusive group of post-religious, spiritually-minded individuals open to all beliefs (or non-beliefs), gathering in community to celebrate the Kosmos – is formed.

Thank you to Layman Pascal for his contributions to this timeline.

4 responses to “A History of Integral Spirituality”