Gay Pride and the Plank in Dr. Pritchard’s Eye 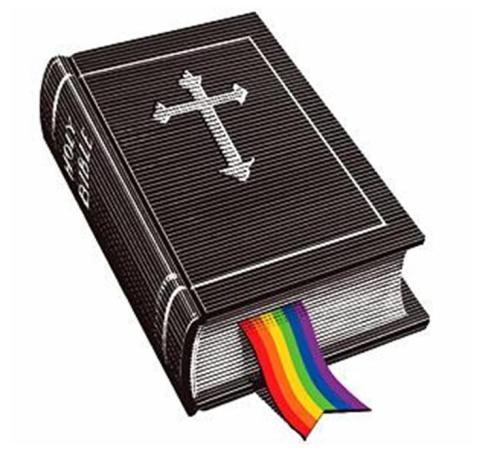 Last week, I received an e-mail from Dr. Ray Pritchard warning of a “coming evangelical divide” over gay rights.

He assures us the divide will not be over homosexuality or gay marriage. Pritchard claims that when this line is drawn in the sand, it will be over “biblical authority,” and will mean “splitting denominations, the leaving of churches, and in some cases, the division of families.”

Pritchard says this issue is a “deal-breaker,” that there is “no middle ground,” and that “the people who think it’s okay for two guys or two girls to get married and then come and lead Awana on Wednesday night will never be accepted by the rest of us.”

Can’t we all just get along?

“No one can be happy about the very real pain involved” in this coming split, he continues, but it’s “better that we should separate than stay together and pretend at a unity that does not exist.”

I’ll return to that in a minute. He goes on:

Pastors, church leaders, Christians, and those with influence who admit to “struggling” over the issue from the “seductive voices calling us to ‘rethink’ our position,” you’d better pick a side in this battle, he says, because in the end, “we all get to decide where we stand.”

Really, Dr. Pritchard? Do even our lesbian, gay and transgender brothers and sisters get to decide for themselves where they will stand?

You say the divide will be over Biblical “authority,” but I wonder if what you really mean is biblical “interpretation.”

I understand that you’re approaching this topic from a strictly Christian perspective (though I’m sure Jewish and Islamic fundamentalists would totally have your back on this). But, unfortunately it seems that the “authority” in you that drafted this letter is rooted in your own ego and self-preservation, as well as the preservation of the organization that trained you — the old tried-and-untrue concern of the Orthodox church that accepting homosexuality will somehow erode the perpetuation of our species. Your authority is not rooted in love, it is rooted in irrational and paralyzing fear. And that’s a form of man-made “authority” we need less of in this world, not more.

You claim in your letter (or shall we call it a tract?), “it may be that we will be the ones leaving some churches because we are the minority.” I pray that this is true. I also pray that those who count themselves in your number continue to dwindle, as their hearts and minds inversely expand in a blinding compassion for all of humanity. I pray for a world where minorities (actual minorities, not just minorities of the mind) can learn to love and respect one another, and do away with the borders and boundaries that continually seek to define them. In this regard, this line in the sand you propose may very well serve to benefit both parties. We (since we’re at least temporarily choosing “sides”) only want for you to hold more love and understanding in your heart. For in the stages we move through on our road to devotion, we begin in ignorance, before moving on to disquiet, insight, surrender, transformation, understanding, and ultimately, unification. Your letter is rather disquieting, so I can at least congratulate you on being slightly less ignorant than you were before you wrote it.

20% of the people on Earth are homosexual (not to mention the 10-15% of any species that display homosexual behavior). This is a reality in nature. This is a feature (not a flaw) of God’s continually unfolding creation. All humans (no, all living beings) are worthy of divine love and grace. Some may feel the need to be baptised to allow themselves access to that kind of love. Some may simply wake up one day to realize that this love has been with them from the beginning.

Homosexuality is not a trend, and these are not conversions. Any recent increase in these numbers is due to the fact that people are finally finding the courage to live as they truly are, and proclaim it. They are gaining the strength to love who they want, and how they want, in broad daylight.

This is important: binary forms of sexuality have never been normative. Sexuality and gender roles exist along a biological, psychological and sociological spectrum, and the idea of simple one male/one female binary pairs is a learned one. Perhaps the fact that we’re learning untrue (or partially true) things about gender might explain why there is so much confusion and trauma around human sexuality (not to mention sexual ethics).

In response to you, Dr. Pritchard (and those who think and feel as you do) I would ask this, “When it comes to our gay brothers and sisters, what would you have them do?”

How would you provide pastoral care to the families that have lost their children to such violence? Could you justify something like the New Orleans 1973 massacre at the UpStairs lounge where the families of the victims didn’t even claim the bodies of their children? How do you propose Jesus would feel about such an act?

Can you consider the basic human rights issues? Imagine your letter with the word “gay” replaced by the word “black” or “female,” and imagine publishing that same letter today.

And, is it really “better that we should separate than stay together and pretend at a unity that does not exist” when Jesus taught us that there is only ever unity with God — that “the Kingdom of God is within” (Luke 17:20). Is the “division” of a family over this issue really what you’d like to see happen? Do we really need more broken families? And is suggesting so the responsible thing to do, considering your vocation?

From a biblical standpoint, if you (or the person who influenced your thinking) are using the passages I think you’re using to justify your beliefs, then the “word of God” in question is based on the Hebrew-to-Greek-to-English translations of the Old Testament, but as a Christian, wasn’t the sermon on the mount (Matthew 5-7) an attempt to reconcile and update some of those old, outdated beliefs (this, even in the first century)! It went like this: “You have heard it said, [insert Old Testament “law” here], but verily, I say unto you [insert Jesus’ interpretation of that law here].” Ask. Seek. Knock. “And in everything, do to others what you would have them do to you, for this sums up the Law and the Prophets.”

Furthermore, how might you interpret Jesus’ teaching that “what you do unto the least of my brothers and sisters, you do unto me” (Matthew 25:40) and his new commandment to “love one another, as I have loved you” (John 13:34)? Is there any possible way to twist the meanings of these sayings to support your position?

Dr. Pritchard (and those who think and feel as you do) I urge you to please stop making your personal cause the business of your church. Please consider that Christianity has the potential to be a vehicle and a catalyst for the most love and the most good, not simply an organization concerned with people believing the right things.

I beg of you, take your ministry (not your preaching) to more gay and lesbian couples and families. Understand what their day-to-day struggle is really like. Ask them what you can do to help. Discover for yourself that there are even gay families who think that the Pride parades are a vulgar display that don’t represent their values.

Finally, come down on any side of the issue you want, back any side of the argument you choose. But, please, do not be so steadfast in your beliefs that you are not open to change if undeniable evidence or a change of heart comes your way. Remain open to the continuous expression of God in the world. God, as the source of all things, continues to speak through our hearts, minds and souls, but we will not hear if we are trapped in circuitous biblical debate with our neighbor. I’m not sure if my voice has been “seductive” enough for you to “rethink your position,” but I do hope that you rethink your own ability to change, to love more, to look within and listen to your own heart, to see the people on this planet for the depth and diversity that they bring to our human experience on Earth (in all the colors of the rainbow)! I believe that you are capable of holding even more perspectives, more dialogue, and a more inclusive consciousness.

All my love, Joran

For more information, check out the work of Matthew Vines or Joe Perez. They will be sure to help remove the plank from your eye.

Matthew Vines on The Bible and Homosexuality

Author, Musician, Interfaith Minister, Chaplain, Public Speaker, Event Producer, Marketing Professional, Husband, Father - Not necessarily in that order. Follow me on Twitter @joranslane. END_OF_DOCUMENT_TOKEN_TO_BE_REPLACED
This entry was posted on Friday, June 27th, 2014 at 7:55 pm and tagged with Bible, Christianity, Dr. Ray Pritchard, Gay rights, Homosexuality, joe perez, Matthew Vines, Pride, sermon on the mount, sexuality and posted in Debate. You can follow any responses to this entry through the RSS 2.0 feed.
« Interfaith Couples: Eli and Shay
Our next Third Sunday service will be pretty special »