God is Not One: An Interview with Stephen Prothero

We sometimes hear people talk about, “one God,” or “one love,” or that the many world religions are simply “different paths up the side of one mountain.” But, what if that mountaintop actually was different for everyone? What if it looked and felt different to everyone who found the courage to climb?

God can be described or experienced (sometimes in the same turn) as loving, wrathful, or ambivalent – not to mention perceived by some to be male, female, or even beyond gender.  The ground of Spirit is viewed through a cultural lens by those who are seeking to commune with it, and it can be described as pure energy just as easily as it can be painted as an eight-armed deity or rendered a winged female with a halo. Conversely, a person’s culture can be tinted by their spiritual worldview, leading to a rigidly hierarchical class system or a life committed to giving to those less fortunate.

Author Stephen Prothero (Religious Literacy), was recently interviewed by C-Span’s Sally Quinn about his newest book, God Is Not One, in which he points out some similarities, but mostly the important differences between the world’s “most influential” religions. The book objectively puts eight of the world’s largest religious groups side by side and provides a brief history of what they believe and why. But, the biggest accomplishment here by Prothero is determining the “unique human problem” that each religion solves for its adherents. For instance, the problem in Christianity is “sin,” thus the solution is “salvation.” The problem in Islam is “pride,” thus the solution is “submission.” The problem in Buddhism is “suffering,” thus the solution is “awakening.”

This approach goes a long way in assisting current methods of interfaith dialogue. When everyone thinks they’re talking about the same “God,” and the same definition of “spirituality,” yet still ends up leaving the conversation angry, frustrated and confused, it could be that not addressing religion’s “job to be done” is part of the reason.

Prothero’s book is highly recommended, but in the meantime, the following video features Prothero discussing many (if not all) major points of the book. It is an hour-long episode, and embedding is disabled, but click through to the C-Span site and enjoy! And, as usual, please leave your thoughts and comments below. 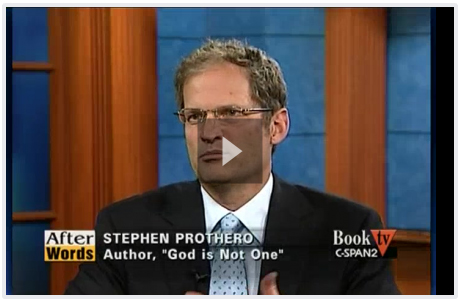 Author, Musician, Interfaith Minister, Chaplain, Public Speaker, Event Producer, Marketing Professional, Husband, Father - Not necessarily in that order. Follow me on Twitter @joranslane. END_OF_DOCUMENT_TOKEN_TO_BE_REPLACED
This entry was posted on Friday, September 28th, 2012 at 12:36 pm and tagged with conversation, dialogue, God, interfaith, one, religion, spirituality, Stephen Prothero and posted in Debate, Integral. You can follow any responses to this entry through the RSS 2.0 feed.
« A Prayer For the Children
Juicing Workshop at First Unity Campus on November 17 »

3 responses to “God is Not One: An Interview with Stephen Prothero”